In the middle of trying to pack for our camping trip I realized I had almost forgot it was MEGA DEAL WEEK at Kroger! What was I thinking??? The SALE ends Tuesday at midnight and it was Monday evening, I must drag evenyone to the store and NOW! 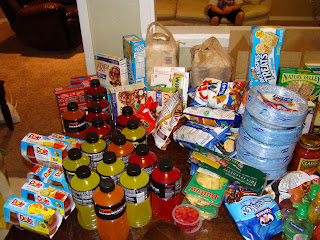 So the deal is when you buy 10 select items you get $5 back, you can do this three times in a transaction for a total of 30 items, each time through the checkout… (are you still following me??) I had so many coupons that matched up with the sale that I had (OK I didn’t have to, but to get the deal I had to) to go through 3 times = 90 items. …Can someone put this into an equation for me?? 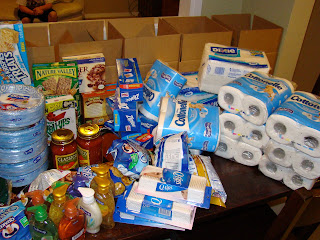 Now imagine doing this with 5 kids, one who was flailing violently in the little magic car grocery cart due to being woken up from two naps earlier that day. Since Rush is only 14mo. I cut him some slack and opened every box I had in the cart of snacks he MIGHT like. Tucker was lucky enough to be at a friends house so he missed the fiasco.

Once through the checkout the first time I had to put everything in the car and go do this fun little outing two more times.
GRAND TOTAL: I spent $56.89 and SAVED $173.25.
My kids might hate me-but it is my little sick satisfaction of having legally robbing Kroger. 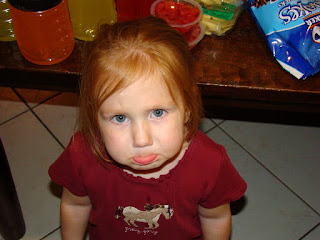 This picture is of Storie, who wanted to be included in the first two pictures but wasn’t. Heart breaking, isn’t it!
This post may contain affiliate links.