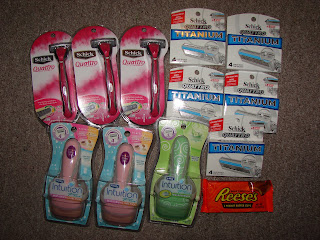 I had a little shopping trip today with a buddy. I was hoping Target would redeem themselves at least for this one transaction and they did…
This last week in the Smart Source insert in the Sunday paper was a TARGET coupon for $4 off a Schick razor/refill. I COMBINED this with a manufacturers coupon for $4 off a Schick razor/refill from the week before, for a total of $8 off ONE razor/refill. A few of these were marked to $6.99 resulting in $1.01 overage. The green razor was $8.29 so I had to pay $.29 cents for it. My total for all 11 razors, two candy bars (already ate one!) and a little box of goldfish was $.53 cents!
Good deal even for Target!
* My Target allows more than 1 Target coupon at a time.