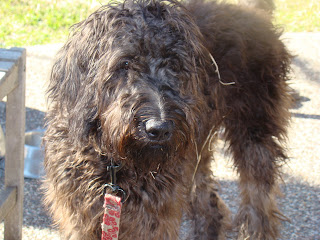 We (the kids and I) love Miller, despite his horse-like legs and bowling ball qualities of mowing the children over constantly.  Yesterday I was looking at the dog and thinking, “Wow.  Since when did he start looking like shag carpet from my Grandma’s basement?”  Being a licensed barber I thought I’d whip my clippers out and fix him up a little bit.  Anna and Jeff volunteered to help.  We drug the dog outside, grabbed the clippers and decided to start somewhere that wouldn’t be very visible.  Within 2 seconds my clippers were stuck.  His fur was so thick and tangled I couldn’t get through it.  “Bummer!” Anna said.  “But since you have the clippers and stuff out, can you cut mine and Jeff’s hair?”

Paul came home right as Jeff was almost done.  He surveyed the situation.  “So the dog, Jeff and Anna get haircuts before I do?” 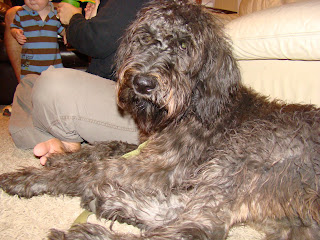 Three haircuts later Miller still looked awful, especially now that he has a bald spot on his side from where I tried to cut his hair.  Since I love him (Paul and Miller are not on speaking terms since the “cable” incident) we’re going to spend more money getting him groomed than I have ever spent on my own hair.  I will post before and after pictures this coming Tuesday… oh how exciting!
Dumb dog.
1 Comments
This post may contain affiliate links.