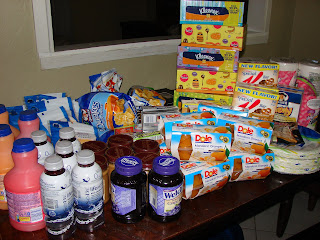 I made two trips today to Kroger. They are running their deal this week when you buy 10 participating items you automatically get $5 off your purchase when you check out. This makes for great deals even without coupons. Add coupon in the mix and it even gets better. There is also no limit, so I bought 60 mix and match items in one purchase and before coupons they automatically took of $30 before I paid, obviously you have to use a Kroger card when you do this.
I saved $97 dollars between coupons and the automatic $30 off. I spent $61 in cash.
I went back a second time when I realized how good the deals were for the kleenex and paper plates. I needed these badly. They also have the natural peanut butter as part of the mix and match and we have $1 off coupons so I wanted to get as many as I could.
I also ran to Target and did another deal like Paul did the other day, it was too good to pass up you can read about it HERE.
I spent some time talking to two different managers at Kroger today, I know some of you have been having problems at the Rayford store. They are rude and inconsistent with their coupon policy. They also don’t follow it at all, and the manager has admitted to me that he hates Women who coupon. Strange. The managers at the Kroger store on Gosling and Research have been more than nice. They want us to shop there and have asked what can they do for us. They know their coupon policy and will allow multiples of any coupon as many as you have. Obviously only doubling or tripling the first three of every like coupon. But, you can hand them 15 of the same coupon and they will take them all. It might be a farther drive but at this point I consider it worth it.