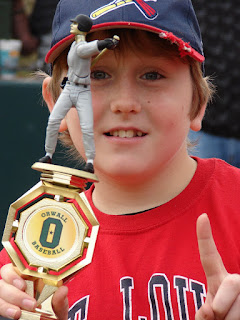 Tucker’s Cardinals team went to the fall World Series. They were the team to beat. It was the best baseball game I have ever seen. Tucker is the catcher and is so quick to the ball, it is rare that anything gets by him. At this age there is still pitch count rules so both teams had to pull out their best pitchers in the bottom of the 5th so they can’t throw too many pitches. Going into the 6th inning it was tied 0-0. We held them in the top of the 6th, our best base runner, who also had a broken wrist, made it to 2nd. Since the 4th inning people had been stopping to watch the game from other teams. It was really intense. Our pitcher came up to bat, and hit a walk-off home run!! It was so well hit, the ball went over the fence and hit the scoreboard. I can’t even describe the stands reaction, I was hoarse from screaming for days, it was the first sporting even that I have ever cried at! Way to go Tucker and the Cardinals!